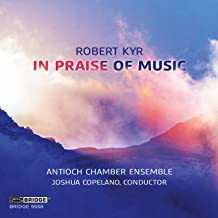 Antioch is thrilled to have released a brand new CD of works by legendary choral composer Robert Kyr, titled In Praise of Music, on July 9, 2021, produced by the GRAMMY-award winning SoundMirror and released by Bridge Records. Check out our webpage dedicated to this project.

Have a listen on your favorite streaming app, or order a CD through Amazon today!

Widely regarded as one of the finest professional choral ensembles in the United States, The Antioch Chamber Ensemble is currently celebrating its 24th season of exceptional music-making. Under the leadership of founding Artistic Director Joshua Copeland, and executive director Stephen Sands, the ensemble strives to present as diverse a program as possible of the world’s greatest choral literature, both sacred and secular, and has performed works ranging from Renaissance polyphony to contemporary masterpieces with a core group of ten to twelve of the New York metropolitan area’s finest singers.

Antioch has been awarded first-place honors in the highly prestigious Tolosa International Choral Competition in Spain, establishing them among the top rank of professional choirs in the world. In recent seasons, Antioch has been called “stellar,” “flawless,” “an exceptional group,” and “a spectacular example of what a classical choir should sound like” by the national press.  Of the ensemble’s début for the Chamber Music Society of Lincoln Center, The New York Times wrote: “The Antioch Chamber Ensemble performed … with clarity of tone and intonation so pure that you could hear the buzz of overtones created by some of the close harmonies. The most daring of these often color the sighs and wordless exclamations that punctuate both spiritual and secular texts, and the Antioch singers gave each its expressive register: impassioned, weak-kneed, swooning.”  Other past performance highlights include concerts for the Metropolitan Museum of Art, the Curtis R. Priem Experimental Media and Performing Arts Center (EMPAC), the Piccolo Spoleto Festival, the American Choral Directors Association Eastern National Conference and the Festival des Choeurs Lauréats in France.

In recent years, Antioch has earned a glowing reputation for its pitch-perfect and expressive interpretation of modern music.  The ensemble gave the European premiere of Eric Whitacre’s “The City and the Sea,” as well as the world premiere of Bruce Adolphe’s “Of Art and Onions: Homage to Bronzino” at the Metropolitan Museum of Art, commissioned by the Palazzo Strozzi in Florence.  The same year, the group’s second recording, The Passing of the Year (featuring the titular cycle by contemporary composer Jonathan Dove), was released by MSR Classic; Fanfare raved of the group’s “flawless blend, excellent intonation, and enthusiastic but sensitive phrasing.” Composers Paul Mealor, Ivo Antognini, Matthew Brown and R. Douglas Helvering have all composed works specifically for Antioch.

Dedicated to the support and education of promising young composers and singers, Antioch has held residencies at colleges and universities including Princeton, Harvard and Washington and Lee Universities, and Vassar College. The ensemble is the recipient of a grant from the Aaron Copland Fund for Music and produced the first recording of choral works by Matthew Brown, (though love be a day). Antioch recently made a recording of the works of Robert Kyr, which was engineered by the Grammy Award-winning SoundMirror company, released in 2021.